The Tower reversed and upright meaning

The Tower was built on the top of a rocky mountain, which is not a good place. It cost just one lightning strike for the construction to start falling apart. However, the problem is not a natural phenomenon, but an unstable foundation. People jump out of the windows with their heads first. This is real chaos. 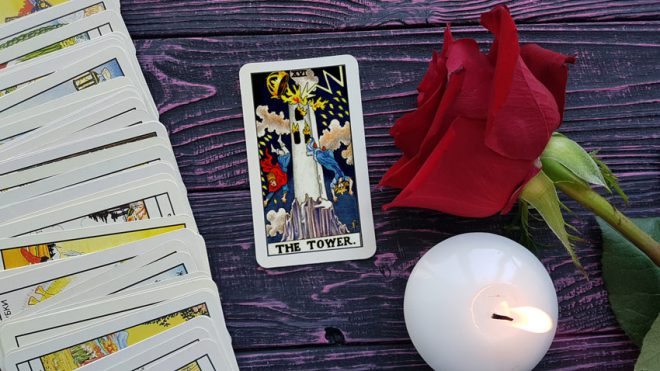 The fate of the tower shows the fall of ambition because of empty promises The lightning is a clot of energy from the outside that leads to destruction. It knocks the crown from the top of the building symbolizing the flow of universal energy through the crown chakra. People are trying to escape, but they don’t think about what is waiting for them down. The flames around symbolize the 12 signs of the zodiac and the Tree of Life. It’s a sign of divine intervention even during the chaos.

When the Tower appears, expect a serious change, which will turn everything upside down. This is a real earthquake that can’t be avoided. The card is a precursor of chaos, but the upright position speaks of a bright future. The best scenario is to survive the destruction of the tower and build the new one. To be honest, it’s really difficult and can bring a lot of pain.

The Tower appears at its quietest and most stable lifetime to tear things up. Lightning is the truth that destroys all illusions. The person realizes that he has built his life on false ideas, which leads to a fall. He does not understand what is real and what is only a false assumption. However, the answer is difficult to find because no one is trustworthy now. This is a difficult time, but an excellent lesson that helps to find the right new belief system. When the Tower falls completely, the person feels stronger than ever. It gives energy for spiritual growth.

Fortunately, the Tower is not always associated with destruction. The person can avoid strong shocks if truth awareness comes before the situation reaches a melting point. In this case, the card means just a positive transformation and liberation from the tower based on wrong beliefs.

For love and relationships

For those in a relationship, the Tower is often a bad sign. The card often brings breakup or divorce. It can also be any destructive for both events. These are certainly difficult times for partners, so they should be even more open to each other. The situation can completely exhaust lovers. However, in the end, they realize that it was not in vain. Both partners and their relationship become stronger.

Alternatively, the card means revealing a shocking truth. The Tower may be a sign of betrayal and cheating. This often indicates the affair of one of the partners with a close friend or sibling of the other. This often becomes the cause of separation and divorce. The cheater must also deal with the difficulties of the consequences.

On the other hand, the Tower has a more positive meaning. Partners lose illusions about each other, which leads to the strengthening of their connection. The process of accepting the truth can take a long time and be painful for both. However, this creates a more solid foundation for a long-term relationship.

For singles, the Tower is a sign that fate will show them the reason for their loneliness in the most painful and shocking way. For example, selfish, arrogant people will face events that break their ego. This is an unpleasant but useful lesson that will lead to a change in character and attitude. It helps to gain healthy relationships in the future. The Tower can also mean a feeling of depression and emptiness. The past relationship was long gone and left a mark on the person.

For money and career

This is often a sign of a prolonged absence of a job. For those who are looking for work, the Tower means dangerous conditions, such as those that firefighters or soldiers have. Alternatively, the card means toxic relationships with colleagues. For those who have a calm job and a career, the Tower indicates change and the destruction of peace. Sometimes it can be a promotion that suggests a stressful environment and difficulties but bring great reward. As for finance, the card often tells about bankruptcy and problems. Alternatively, it means unexpected debts. Now is a good time to start saving.

The Tower reversed also means a big change. However, in contrast to the upright position where it is a very painful process caused by factors from the outside, the inverted position speaks of a voluntary desire to realize the truth. The card represents the awakening and reevaluation of fundamental belief systems. Opinion or attitude to a particular topic that the person has previously supported can be reversed. Alternatively, this means a truth-seeking crisis. But don’t worry, because it will end sometime and really good times will come. Transformation helps to find a new self.

Sometimes, the reversed Tower means resistance to change. The person clings to an old belief system and denies the need for transformation. It may be painful, but delaying may cause more damage than the process of revelation. Physical and mental health is in danger. the Tower card brings the inevitable change, therefore it’s useless to hide.

Alternatively, the reversed Tower is also a warning. Intuition tells the person that hard times and destruction are coming. Now there is time to think about an escape plan or how to minimize damage.

For love and relationships

In love Tarot, the Tower reversed is a sign of a broken relationship. However, one or both partners don’t want to accept this fact. The person doesn’t want to leave because he is afraid of painful consequences and loneliness. Lovers think that they can fix everything, but it is useless because the crack in the relationship is very big. Both must remember that holding on to what is already broken prevent them from finding happiness with new people.

Alternatively, the card means that lovers have already gone through the events that the Tower card symbolizes. In this case, the couple shouldn’t try to bring the old relationship back. But the changes are irreversible. Now, both partners must decide whether their new feelings and attitudes satisfy them.

For single people, the Tower reversed can be positive. The card means that the person has escaped a destructive relationship with a dangerous partner. Alternatively, the card means difficulties in accepting past traumatic relationship and breakup. However, this is the cause of failures in a person’s love life now. He must stop running from the consequences and draw a line between the past and the future leaving all the negative behind.

For money and career

The Tower reversed means stressful working conditions, but the person copes with it perfectly. However, some things are getting out of control now. Unfortunately, the card is often associated with failure and job loss. But there is no need to be sad because it opens up inspiration for building new plans and goals. The Tower reversed also means a period of change after financial difficulties and bankruptcy. The person must find unexpected solutions to achieve success.

The Tower is the card of destruction and chaos. The person can’t avoid this, so the best advice is to minimize the damage. The main thing is to accept change and build new beliefs and better conditions for living. There is no need to try to bring the past back.

The Tower answer: Yes or No?

The Tower is associated with chaos and unexpected changes in life. All this is irreversible and painful. The card foreshadows shocking events, crisis, catastrophe or bankruptcy. The answer to your question is NO. 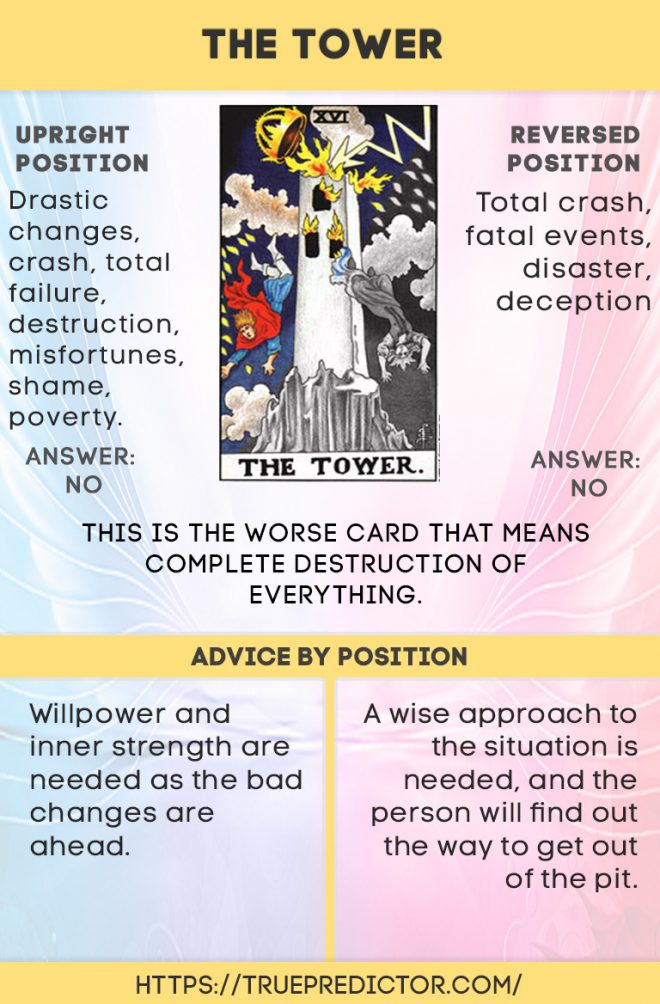