The Three of Swords represents a heart pierced by three swords. This is a sign of offensive actions or words that hurt deeply. The picture heats down by storm clouds gathering in the background, which also speak of sadness and pain. However, there is an invisible hope that the sky will become clear and dark times will pass. 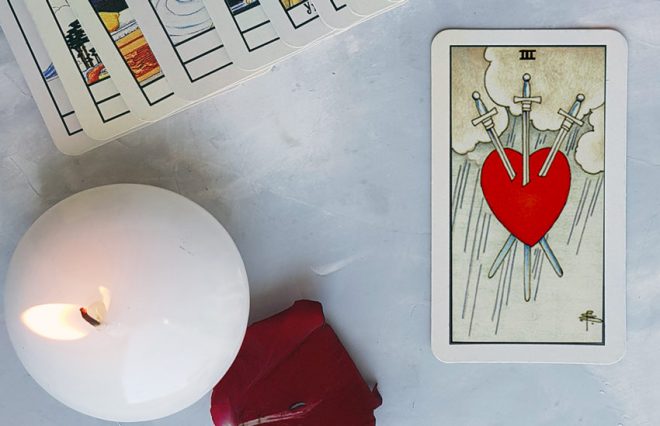 The appearance of the Three of Swords means that you are hurt by the actions or words of other people. You did not expect this, so the pain feels even stronger. However, the card recommends taking insults as an integral part of life, as a valuable lesson and experience. The challenges push us out of our comfort zone and make us learn to be stronger.

If you have experienced shock or loss of something essential but hide it in yourself, the Three of Swords recommends splashing emotions out. Do not keep tears, as crying is part of cleansing from sadness. Holding pain, you only prolong it. If you are furious, shout and destroy the things that remind you of the reason for your anger. In addition to emotions, you should also let memories go away. You are strongly focused on the past, which prevents you from moving forward. Accept what happened as part of the recovery process.

The Three of Swords speaks not only about pain but also about its end and hope for a bright future. When the clouds are gone, the sun will come out. You must be strong and wise during this period.

Alternatively, the Three of Swords claims that you are sensitive to other people’s words. Remember that not everything is correct. The criticism and negative opinion of your colleagues, internet trolls or friends are a projection of their inner fears. Think about what makes them want to say mean things about you.

The Three of Swords reversed claims that you are prone to self-criticism, restrictions and negative thoughts. Remember that words have power, especially if you repeat them every day. You are your own abuser. Review your opinion about yourself and understand that you are a better person than you think. Find the motivation to revive the positive within you. Besides, the reversed card indicates you are sensitive to other people’s words. Do not let someone else’s opinion close to heart, but listen to it, maybe it’s true. However, criticism from even best friends can be caused by envy or other negative feelings. You must know who you are and not let others change your mind.

Most likely you have experienced emotional trauma, or the loss of a loved one recently. You are very worried about this, and the reversed Three of Swords sees your pain. However, the appearance of the card in your Tarot reading also speaks about the recovery process and the fact that you will soon bounce back. Enough time has passed, and you can accept what happened and move on. Think of a new hobby or something that also makes you happy.

Alternatively, the reversed Three of Swords means that you find it very difficult to move forward after a recent loss. The card recommends being alone with emotions to realize everything and let the pain go. A long recovery period awaits you. However, be careful not to dive into yourself as you may miss significant opportunities. Most likely, you do not understand why you have deserved such suffering. Learn to accept certain circumstances as part of the life cycle. Transform pain into an experience and go through this period from beginning to end.

Three of Swords for love and relationships

If you are in a relationship, the Three of Swords means a conflict that hurts you both. However, keep in mind that this is temporary and you should not make hasty decisions about break up. Instead of crying and getting angry, think about the reason for the quarrel. There is an issue, which is a more critical. Talk to your partner about what concerns you both to solve this problem. The appearance of the Three of Swords often indicates a lack of understanding in a relationship, which leads to conflicts. Be honest and accept the words of each other with respect. Criticism, humiliation and nasty comments just make things worse.

Alternatively, the Three of Swords means separation, divorce, or legal problems related to this. Also, the break up can be due to third parties. For example, someone found your relationship unprofitable and influenced your couple. The third wheel can also be a mistress as the card means infidelity and betrayal.

If you are single, the Three of Swords indicates long-term loneliness. Most likely, the break up with the previous partner was very painful, and you still feel hurt or angry. Before you start a new relationship, get rid of the old memories. Alternatively, you are a person who someone cheats on the partner with. Do not count on such a person, as he doesn’t take you seriously.

The Three of Swords reversed means a period of forgiveness after the crisis. It’s time to get rid of heartache to improve the relationship. Spend more time with a partner and talk about the causes of conflict and the desires of each other. Realize the weight of misunderstanding you have carried to open new perspectives and find harmony. However, the card in the reversed position can also mean reconciliation after a breakup.

Alternatively, the Three of Swords reversed means old wounds. Perhaps your partner offended you in the past, but you could not forgive him, therefore, you have to suffer even now. If this really bothers you, think about the need for such a relationship in your life. Nothing will change if you just hide the pain. You do not ignore the past, but often remind your partner about it, which makes the situation worse. Separate the past and the present, or let each other go for a better future.

If you are single, the Three of Swords reversed means a healing process after a painful break-up. You have been isolating yourself for a long time, but it’s time to come out into the light since you are a new person and full of fresh energy. Alternatively, the card means the opposite. Your suffering after the unexpected departure of the previous partner intensifies. You cannot cope with the pain by yourself. Contact your friends or a psychologist for help.

Three of Swords for money and career

For a career, the Three of Swords represents losses and stress. You may have lost your job recently, and this caused the depression. The card also means conflicts and discussions in the workplace or the end of a communication. You must be respectful and honestly talk to your colleagues about how to peacefully solve the problem between you. The career is the main source of frustration at the moment. However, remember that this is not the only area of your life and you can fill the positive energy balance through personal life. The Three of Swords is a bad sign for finances. Your suffering is due to lack of money or problems caused by this. Clear budget management and planning is the only solution.

The Three of Swords reversed means solving stressful situations at work. You feel positive energy inside since your environment is getting better. Communication with colleagues returned, and you feel the harmony in the team. Alternatively, the card means that the situation gets worse. If you have difficulties with money, the Three of Swords reversed says some help that will improve your finances. Also, the card in the reversed position means a loss of financial stability. It is difficult for you to accept a loss and get used to the present state.

The Three of Swords talks about pain and the need to throw out emotions. You only prolong the healing process by ignoring the problem. Realize the reason for your anger or resentment and take it as a lesson.

The Three of Swords means losses and suffering. The appearance of the card means no to your question. 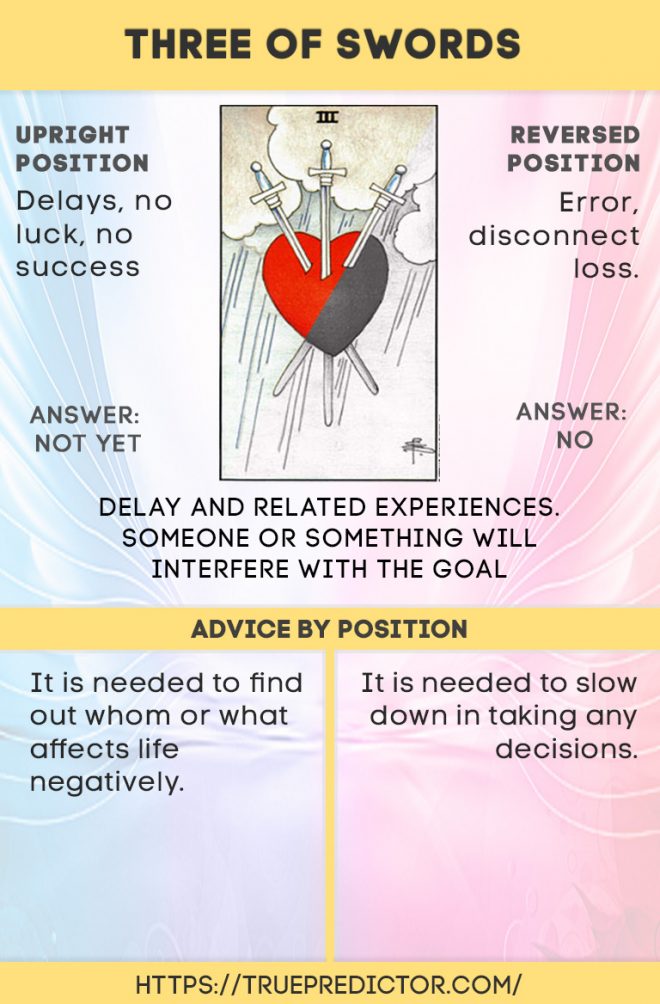