The Seven of Cups meaning for love, money and future

In the tarot card, a man looks at seven cups in the clouds with things in each. Some of them carry valuable gifts like jewels, wealth or victory. However, not everything is as good as it seems since other ones have dragons or snakes. The Seven of Cups shows the dreams of a man, but he must be careful because desires can turn into a catastrophe. Golden cups look attractive, but not always what is attractive brings the benefit. 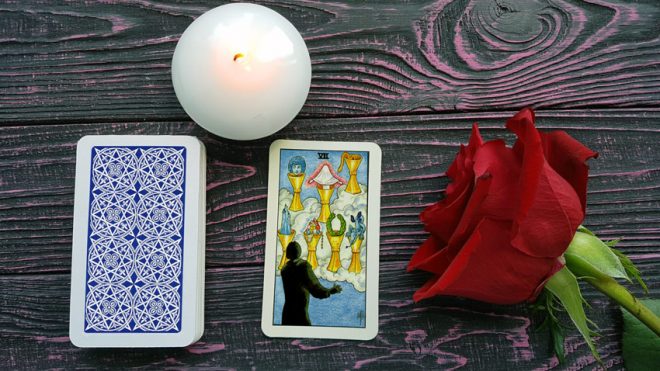 The Seven of Cups presents new features and choices. However, not all of them are fabulous. A person is prone to illusions and may not see the truth behind an attractive image. But the fact is that many opportunities are not as beautiful as they seem and can hide poisonous snakes and fire-searching dragons. For example, fame and money sound appealing but require complete commitment and separation from family. In this case, there is a need to move away from dreams and listen to Higher Self first.

Alternatively, the Seven of Cups means that the person is continuously in dreams and thinks about the future, instead of working on implementation. For example, one wants a perfect body but always puts off the gym. This may apply to any area of life. It is necessary to start working now to enjoy the fruits later.

However, the idea should be realistic. The problem of many dreamers is that they break away from reality in their thoughts. They choose goals that are beyond their power and get disappointed when they learn about it after failure. The Seven of Cups recommends checking plans for suitability.

The Seven of Cups also indicates a person’s propensity to misunderstand things. He falls in love with a beautiful wrapper, without going deeper into the details of the deal, offer or idea. This is true for people, who want to achieve the goal at any cost. They grab every opportunity without thinking about the possible consequences. There should be a clear plan that will lead a person to the desired result. Alternatives can be considered, but carefully.

The reversed Seven of Cups appears in case of the need to choose. One of the options attracts the most, but intuition advises choosing the second variant. The card says that wisdom and the right priorities drive the person. Perhaps he has established criteria that he uses when making important decisions. It is essential to be true to yourself and not to take into account other people’s preferences.

If a person cannot navigate a large number of ideas in his head, the reversed Seven of Cups recommends considering those that have a long-term perspective. Now, a hasty decision can turn into failure and bring many problems. A beautiful wrapper can confuse. To assess the situation correctly, stop or even take a few steps back. Get rid of illusions and listen to an inner voice that tells where success is, and where poison and snakes are.

The Seven of Cups in a reversed position is the card of choice. Numerous options can overwhelm the person and blur the attention. First, there is a need to reduce the number of opportunities. The easiest way is to determine the evaluation criteria based on individual wishes and needs. Each option can hide a danger, so caution is important. Before accepting an offer, think about the realism of promises.

7 of Cups for love

Speaking of love relationships, the Seven of Cups can mean a couple’s breakup. One of the reasons may be that one of the partners found a lover on the side. However, the card does not mean exactly that. The bottom line is that one or both partners no longer have initial feelings for each other. But separation isn’t necessarily. First, the couple should speak openly about the problem and think what they both can do to fix it. If the fire of passion no longer burns between lovers, light it by yourself. It may take some time to resolve the issue. The final decision on separation can be made in a month or as much as the partners need.

Alternatively, the Seven of Cups says that one of the partners is living in fantasies about perfect love without noticing the real problems. He or she puts too much energy in the dreams but forgets about their realization.

Besides, the card may symbolize other important decisions that significantly affect the future of the couple. Most likely, this choice depends on one of the partners. But it’s better to consider all the variants together since there are always two, who are responsible for the relationship.

For singles, the Seven of Cups also symbolizes a wide range of choices. Expect an influx of admirers in the near future. However, this fact does not eliminate the need for careful selection of potential partners. There must be strict criteria to choose the best one.

For those who are in a relationship, the Seven of Cups reversed means the end of the illusions and fantasies of perfect love. The card in this position indicates the beginning of the period of work on the real problems of the couple. Ignoring some issues is merely impossible. As the beginning, both partners should express their wishes and claims. The main thing is to remember that breakup is not always the only way out. Understanding of the problem and desire to keep the relationship are the key to success. All decisions made now are important in the future.

For those who are single, the Seven of Cups reversed means overly impossible standards. People rarely find the perfect partner. Therefore, it is better to revise the list of criteria and be more friendly to potential variants. Don’t refuse to go on a date just because the person doesn’t look like your ideal. This is an excellent way to have fun and find love.

Seven of Cups for business

The Seven of Cups is a good sign and symbolizes many new opportunities. This may be a career boost or a proposal for a more prestigious job. Each option should be considered carefully to avoid pitfalls. Alternatively, the card recommends moving from brainstorming to action. Dreams never come true if you just sit and think about them. However, the implementation plan must be prepared from start to finish. Speaking of money, the Seven of Cups brings many ways to earn them. However, think twice before agreeing to an offer or signing a contract.

The Seven of Cups reversed means the feeling of being trapped in the workplace due to lack of opportunity. Ambitions and creative plans do not have enough space to be revealed. Alternatively, a card in a reversed position speaks of regret for lost position in the past. The man blames himself for not being assertive enough. Instead of thinking about unrealized potential, it is better to plan the next steps in the future. For finance, the Seven of Cups means solving all material issues and a more stable state.

The Seven of Cups foreshadows new opportunities and the need to choose. However, this is not as simple as it seems since each option can be disastrous or bring success. Beautiful wrapper or promises can be deceiving. The voice of intuition will tell which way to choose. Also, the card advises to stop dreaming and start acting.

The Seven of Cups symbolizes opportunities, decisions, and dreams. The card indicates the possibility of poor choices. There are feelings of pessimism and negativity, so the answer to your question is no. 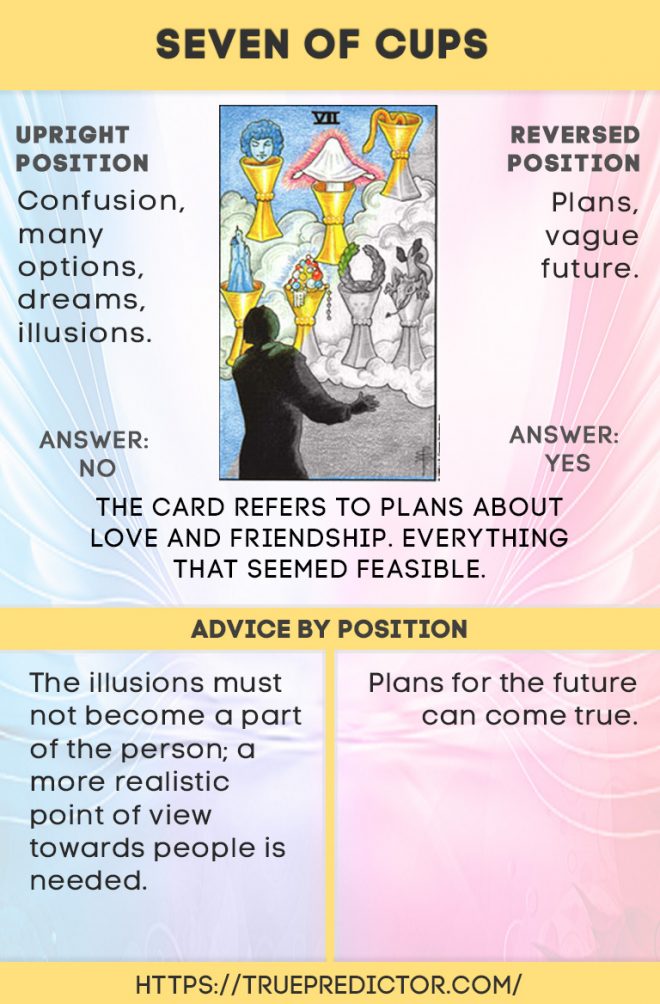