The Moon — meaning of the reversed tarot card

The wolf and the dog in the foreground symbolize the wild nature of the human mind. Water refers to the subconscious world. A small crayfish means the early stages of the expansion of consciousness. 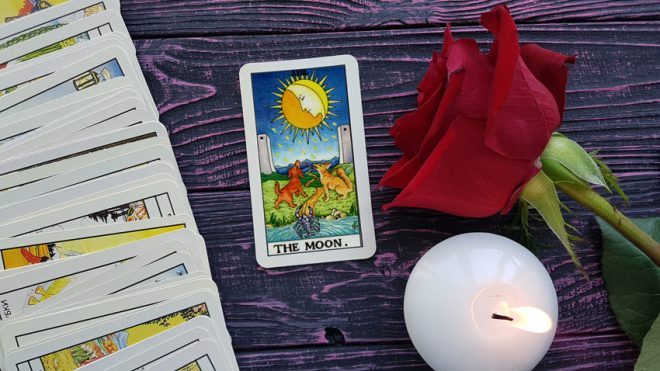 The reversed card, as well as upright, symbolizes fears. Fortunately, the person learns to fight them and live a normal life. He understands how wrong it is to exist with limited beliefs. Improvements are already visible.

Alternatively, the Moon in a reversed position means that the person chose the wrong tactics of the fight. Instead of facing the fears, he buries them even deeper into the subconscious mind trying to escape from them. It’s okay if the person isn’t yet ready to battle emotionally, but he can’t ignore the problem forever. The moment of change will come sometime and the individual will have to show strength and self-control.

When the Moon is reversed, there is a need to listen to intuition. The person can know the importance of communication with the inner voice, but he doesn’t understand it’s advice in the current situation. The problem may be the complexity of the messages or the difficulty of translation. On the other hand, the person may simply not accept the voice of the subconscious. It is important to understand that the answer often lies deep within us. Perhaps this is some hidden desires or dreams that seem unrealistic. A great way not to miss anything is to record these messages to come back to them later.

The reversed Moon in a love reading

For couples, this reversed tarot Arcana is a good sign. Partners begin to reveal their secrets to each other. It may be an accident when one let the guard down and opened the veil of secrecy, or a deliberate desire to show oneself. However, the card doesn’t clarify the response to the truth. It can be a complete disaster or something that strengthens the alliance. Things will never go back, so the couple must learn to live with what they know about each other. If partners love, they will accept any reality and will live happily.

Alternatively, the reversed Moon card indicates that outsiders can learn the truth about lovers. This can be dangerous, especially if this relationship is not beneficial to someone. Mistresses and affairs can come to light.

The Moon in a reversed position loves to disclose deceptions. If the person doubts the partner but isn’t sure, the card will provide all the necessary evidence to verify the concerns. It may also mean removing the blindfold in relation to the loved one. His or her character does not seem as pleasant as it was before.

For singles, the moon in such position means a relationship with a bad person. At the same time, the intuition or the universe can give signals that this is a bad choice. For example, the card often indicates a romance with a married man who hides it but is not quite careful. Alternatively, the card symbolizes exemption from a period of uncertainty and gaining self-confidence.

The reversed tarot card in a career and money readings

The Moon in a reversed position means the period of the creative block. There is a need to revise the attitude to work and career in general. Changes may be necessary. The person should use every opportunity for self-expression. As for finances, Tarot foreshadows a reward or a better paying job. Alternatively, the reversed card means clarification of financial issues. Don’t trust strangers and it’s better to give up on risky investments.

Card doesn’t give clearly answer, may be thing would be better. 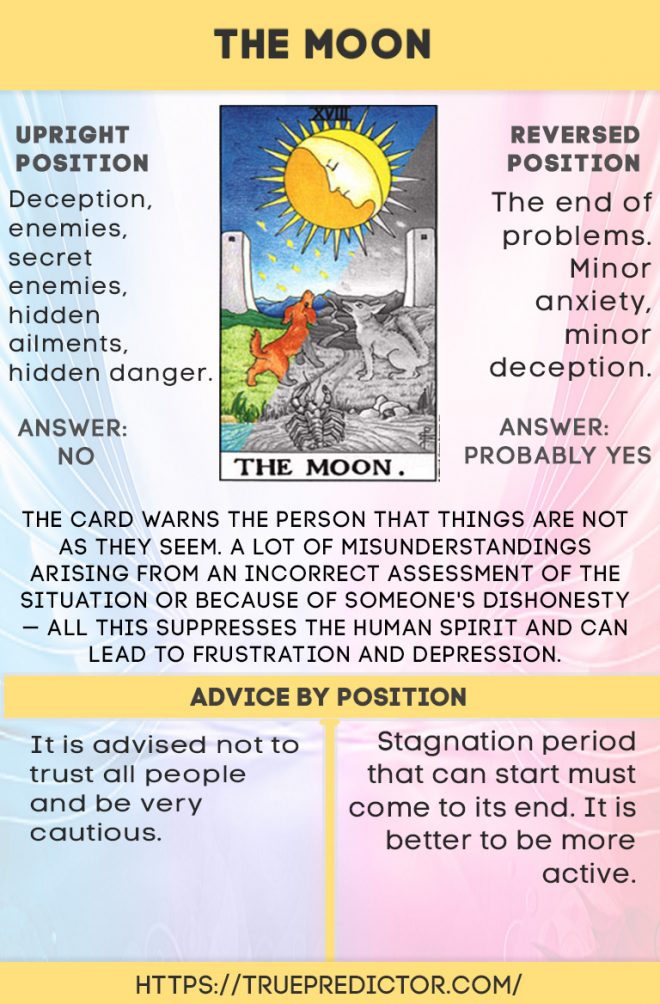