The Magician card is associated with the planet of Mercury and numbered One, new beginnings and opportunities. The man stands with one raised hand showing up to the Universe and the second hand down to the ground. This position symbolizes the connection between the spiritual and material worlds. It helps the Magician to convert wishes into reality. His robe is white, the color of purity and the red cloak is a sign of wisdom and experience. The sign of infinity above his head and the snake eating its tail instead of a belt are symbols of infinite potential. 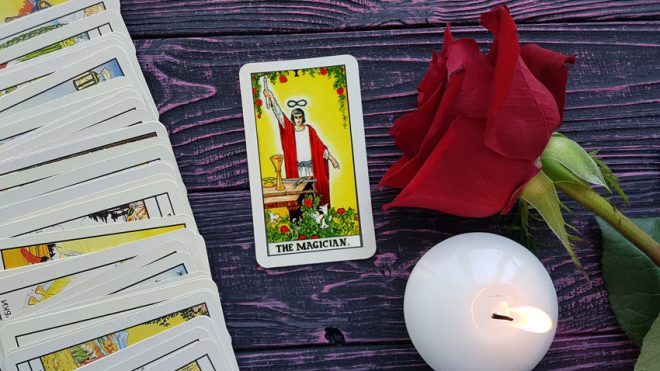 The four symbols of the Tarot suits — a sword, cup, pentacle, and wand — lie on the table in front of him. Each of them symbolizes 4 elements — water, fire, air, and earth. Flowers and plants that adorn the foreground of the card symbolize the profitability of ideas.

What does the Magician mean in universal readings?

The Magician brings everything the one needs to make the dreams come true. The person has all the resources, tools, as well as enough energy and knowledge to properly use them. The card speaks of a wisdom that all parts together are more important than separately. The idea that has already been formed in the head should begin to be translated into reality. The Magician believes that the one came to this goal right now for a certain reason. Previous years have given the skills that should help to implement plans.

However, resources are not the main thing. The Magician understands what he wants on a subtler, spiritual level. He not only knows but feels his goal and strive towards it with every bit of body and soul. The person must also be aware of the reason for his desires and what he needs to do. Only commitment and day-to-day actions lead to success.

The Magician is also about focusing on one case. Spraying in different directions is a losing approach. The person should not pay attention to the irritating factors and concentrate on planning and, then, on further actions. This helps to eliminate mistakes.

Often, the reversed Magician means fear of lack of resources and the constant postponement of the start of actions due to this. The person isn’t confident in his strengths and knowledge. There is no need to worry, just trust the Universe and expect a sign or a new opportunity. Anyway, even small steps can lead to a goal.

If the person is ready to act or even has already begun, the Magician reversed speaks of difficulties. Lack of resources, thoughtful plan or motivation can cause failure. Most likely this is a signal from the universe that man chose the wrong path and that this is not for him. There is a need to go back and revise wishes and priorities.

Alternatively, the reversed Magician means greed and obsession with material things. The person is ready to go for any manipulation and deception in order to get what he wants. He does not think about other people, but only about his own benefit. However, this approach will not bring happiness and may turn into a failure. Besides, the person pursues the wrong targets. The one seeks material good instead of spiritual harmony.

Many people believe that the Magician is a good card in love Tarot. For couples, it heralds a new stage in the relationship. This may be the beginning of living together or joint plans. Anyway, this will lead to a stronger bond between lovers. If the partners have been together for a long time, they can start thinking about marriage and family.

However, the Magician may not only be positive. It all depends on the supporting cards. If the environment promises problems and negative consequences, the Magician can also bring trouble. In this case, it is a sign of deception. One partner is trying to hide the truth. It does not always mean cheating; this can be any negative information, for example, problems at work.

The Magician can mean human qualities. The card gives the person a sharp mind and a soft character. This is an attractive individual who can be both calm and impulsive. The Magician in love behaves very romantic and is not afraid to demonstration his feelings. Sometimes, he prefers to show his playful side to brighten up the routine. Such a person prefers to be proactive and act first.

For single men and women, the Magician means acquaintances. The person can meet a new friend or potential partner. If this is a romantic relationship, the partner will show himself very gentle and caring. Although, the romance will be tense initially as both partners test each other.

The Magician reversed often talks about relationship problems due to lack of trust. Recent events have left consequences and add tension to communication. Uncertainty can break even the most durable unions. Thoughtless actions or hurtful words can make things worse. The partners have to forget all the offenses and talk openly. It is important not to hide desires from each other in the future.

The Magician reversed can mean an untruthful, manipulative partner. Such people think only of their own benefit. The relationship can last long or break at any time. This Magician uses clever tricks to get what he wants and subdue the victim. If he has power, he can limit the possibilities of his partner. Such relationships can be disastrous and should end immediately.

The card often indicates a selfish person. He is not interested in other people’s feelings as he thinks only of himself. His behavior should repel, but he skillfully selects words to attract victims. The Magician reversed often changes his partners as he doesn’t see the need to be tense for the sake of maintaining relationships. He behaves carefree, enjoys life, without thinking about the future.

The appearance of the Magician reversed for lonely means the fear of not meeting true love until the end of life. The person becomes cynical and loses interest in life Negative thoughts will not help strengthen self-esteem and attract a potential partner. There is a need to get rid of obsessive ideas and be more positive.

The Magician for money and career

Despite the workload, things go more easily than before. The Magician promises promotion to responsible employees or even a personal project. This is a special task where the person will be able to show all his knowledge and skills. Alternatively, it may be responsibility for solving a work-related problem. The card often means new features, offers, and a fresh start. Now is a great time to start a business. The Magician also indicates development and resources available. Money is promised to flow from various sources. Successes at work increase the daily income and there are additional ways to earn on the side. The person is completely financially safe.

As a reversed card, it means no motivation, energy, or lack of experience. Certain events prevent project implementation. The Magician reversed means a weak start of a new business. Alternatively, it symbolizes that the person doesn’t fully reveal his potential or behaves non-professionally. The card is also associated with stagnation and lack of profitable opportunities. As for money, The Magician reversed warns to avoid risky investments and decisions.

The Magician is about opportunities. Now is the best time to start action, even if the person doesn’t think so. The Universe gave all the necessary resources and knowledge to start. The main thing is also not to forget about the motives and essence of the idea. A person shouldn’t go for a goal in order to get recognition or money, he should strive to his dream on a spiritual level.

Magician: Yes or No

The Magician is associated with movement and power. The Universe gives the person everything to succeed. The answer to your question is yes. 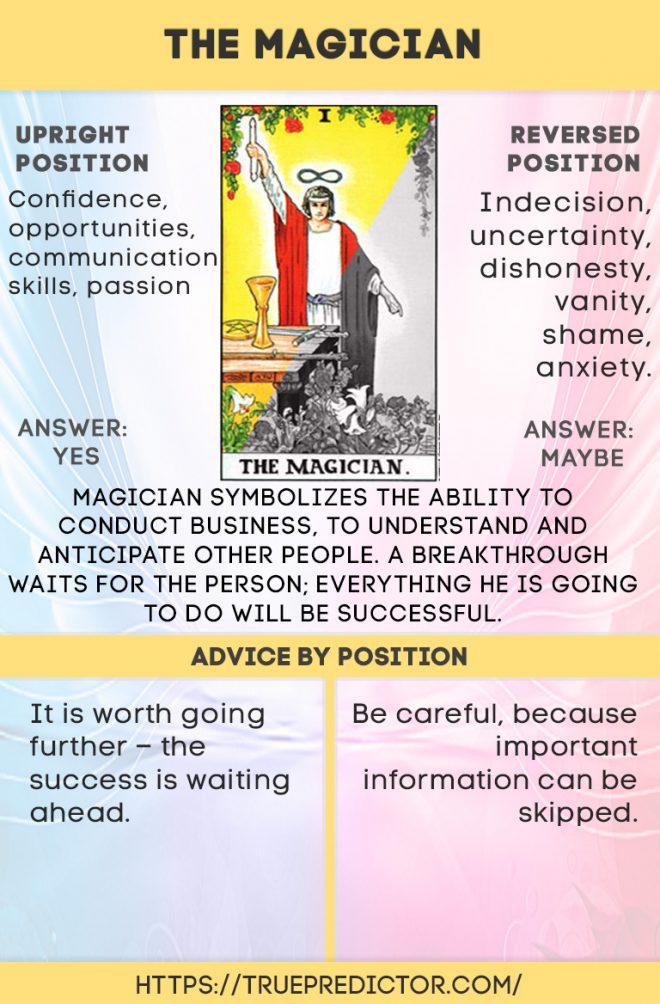