The Devil tarot card shows Baphomet, or the Horned Goat of Men, half man, half goat. This creature initially symbolized the balance between good and evil, human and animal, male and female. Now it often refers to the occult and is associated with evil. The Devil has bat wings sending to vampires, a symbol of weakness in front of raw desires. Baphomet has a hypnotic stare that lures people under his power. His right hand is raised and shows the Jewish sign, better known as the Vulcan Salute from the Star Trek series of films and TV shows. His right-hand holds a lit torch. The inverted pentagram above his head refers to the dark magic. 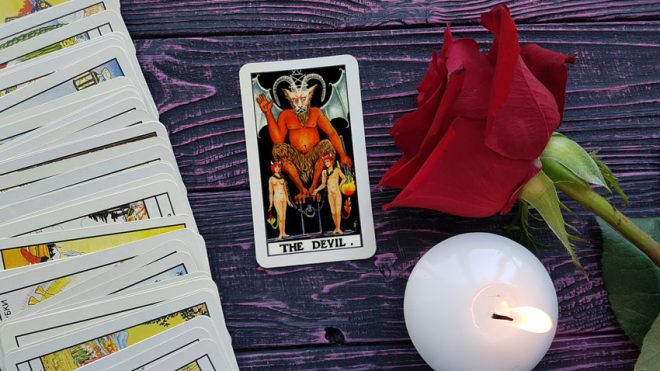 The Devil is associated with the dark side of man, sins and bad habits. This suggests a person’s dependence on the short-term pleasures that cause longer-term pain. In this case, it is appropriate to say that the one has sold the soul to the darkness!

The card means a feeling of lack of control over the situation. The person is immersed in fear and hopelessness. He is sure that this is the only way to live. However, the one is aware of the lowlands of his desires deep inside. There is a need to get this understanding out and start acting to get rid of dependence. It is worth remembering that we all have a good side and hope for finding peace. The Devil is a Major Arcana card so healing will not happen quickly. It will take a long time and will require a lot of willpower and courage. The main thing is to start now and remember that a better future is possible.

Alternatively, the Devil represents animal desires associated with sexuality, fetishism, and dark fantasies. There is no need to suppress such thoughts. The main thing is to remember about the well-being and not to cross the boundaries.

On the other hand, the card symbolizes a strong bond between two beings. It can be a man and a woman, or a mother and a child. However, there is also a danger to lose control and become dependent on each other.

The Devil card in love readings

Sometimes, the Devil can represent a strong bond between lovers. Their relationship is held by passion and similar desires, which can depart from general beliefs. The couple speaks the same language and has many romantic moments like in the honeymoon period. Partners can carry this feeling through a long period.

However, not everything is as good as it seems. Having a similar opinion is useful, but the danger is that it can turn into madness. Lovers can lose themselves as individuals. The notion of “I” disappears and only “we” remains. In this case, both become dependent on each other which makes the relationship unhealthy. It is essential to remember about personal space and interests. Everyone must specify the boundaries of the inner world.

Alternatively, this card means a period of stagnation in the relationship. It seems to the partners that they are trapped and cannot move. Discussions are replaced by scandals and grow into resentments. Here it is necessary to decide based on the feelings of partners. The Devil card belongs to Major Arcana, which indicates a long prediction time. The love between the two must be strong to cope with the problem. Perhaps there is a need to think about break up.

As for those who have many sex partners, the Devil card talks about the need to be careful. The person has been having a lot of unfulfilling sex without caring about the consequences. This type of behavior can lead to STD infection. In case of uncertainty about the past partners or deterioration of health, it is better to contact a specialist. The one must use protection in the future.

Meaning in career and finance spreads

The appearance of the Devil means that the person is a hostage of unloved work. For those who only decide on a career, IT technology is closely associated with this card. The Devil often points to future financial problems. There is a need to cut spending and start saving money. The cause of the crisis can be alcohol or drugs addiction.

The card symbolizes the dark side of man and animal desires. This is not bad, and there is no need to hide it. However, it’s important to be careful and keep the situation under control. The Devil often points out the bad things in life and the need to get rid of them. This may be a dependency, false beliefs or unnecessary restrictions. The one must find the strength to realize the problem and get away from it.

The Devil is about animal desires, addictions, aggression and fear. The card is associated with occultism and dark magic. The answer to your question is no. 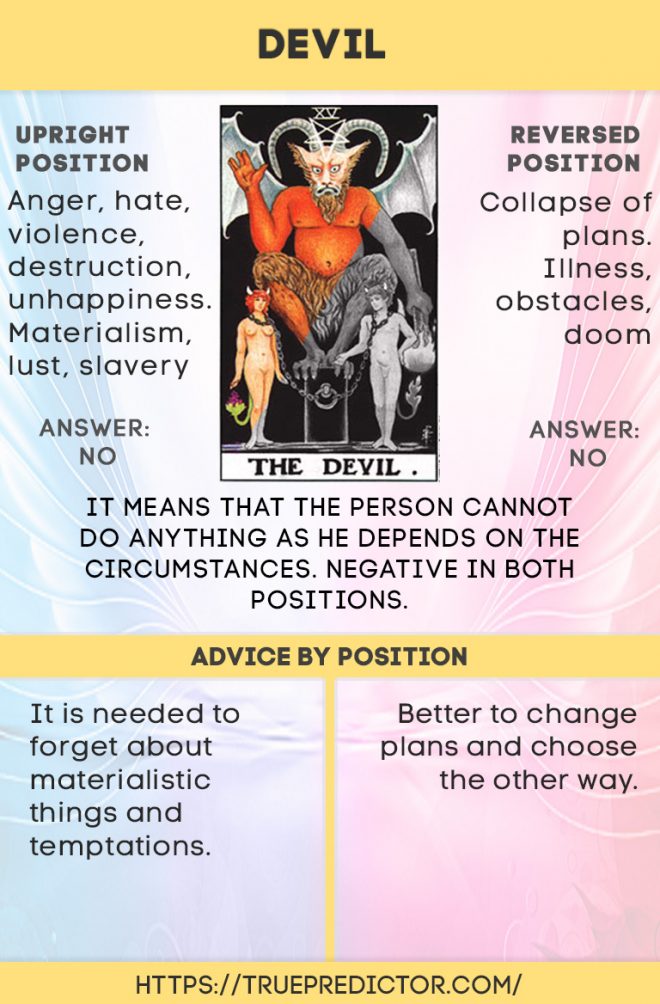