The Tarot card shows a man fighting against enemies. As you can see, a man stands on the elevated land impersonating the “king of the hill” who has achieved a lot and experienced success. He is being attacked by envious people who want to take away his wealth and status. An interesting detail is a pair of shoes of different colors, which means the uneven foundation of its position. 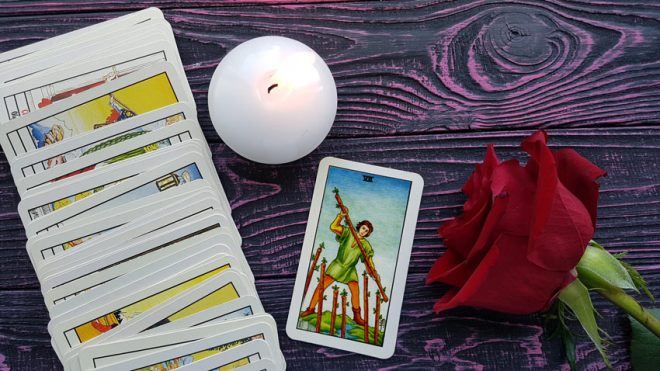 The meaning of this card reminds the meaning of the Five of Wands: unforeseen contests after a long rest and satisfaction with life. However, the Seven of Wands says that you must fight for a better future and a higher position, while your opponents are trying to get what you have for a long time. This prediction is appropriate if you are a public figure and many are aware of your success. Competition and the desire of others to take your place are inevitable.

If you have your own business or project, you can experience barriers created by external sources. The Seven of Wands advises to keep everything in your hands, maintain self-confidence and develop the necessary skills to achieve final success. Fate can help you overcome obstacles by creating a profitable offer for the clarity of purpose. The main task for you is to keep your position giving all your strength and energy to the battle. Do not pay attention to delays and problems.

The appearance of the Seven of Wands reminds you that people do not always share your point of view. Your achievements always have competitors, opponents, and envious people. However, now, you must be sure of the rightness of your actions and not succumb to provocations. Any compromise and rejection of ideals are unacceptable at the moment. You may be asked to make a speech or write an essay to defend your views. Prepare arguments and facts to fight a competitor.

The reversed card position says that you are not up to duty and competition. The tasks that have fallen on you turned out to be impossible, and you want to find a way to give up some and focus on one or two things. You are in competition or are comparing yourself to others. You must learn to believe in yourself and act confidently to achieve the goal. The Seven of Wands reversed tells that your lack of confidence can be caused by constant criticism and judgment from your friends and loved ones. You obviously want them to talk less about you.

Since you are constantly trying to get away from the conflict, you cannot defend your point of view and quickly leave the game. Every time someone appears and speaks out against, you accept the compromise. Thus, you may get a positive attitude from others but lose confidence in your idea. The alternative is that you have fought for your opinion for a long time, but now you feel that you have just wasted your time. If you don’t feel satisfied and there is no progress, it’s best to give up and move on. The Seven of Wands appearance also says that maybe you are very aggressively defending your position, which is especially true in the case of personal relationships.

Tarot also hints that competition can catch you unprepared. You are clearly not ready for this, and the obstacles scare you. Because of the notable nervousness and fear of falling, you want to give up the fight. The card warns that you can be manipulated in this state.

Seven of Wands for love and relationships

The Seven of Wands is a bad sign for lovers. Your relationship has big problems because of constant conflicts, bouts of jealousy and disagreement. Most likely you or your partner are continually creating issues and blaming each other for almost no reason. Another option is if someone outside your relationship tries to destroy a couple. The reasons may be different starting with the desire to get you or your partner and ending with the revenge. Remember that you make decisions yourself and if you both want to keep the relationship, try to improve the situation and do not accept manipulations. Maybe this is really the moment to break up.

If you are single but in love, the card may mean that you will have to fight for this person. If you are really interested in a relationship, make every effort to achieve the goal. You can encounter competitors for the love of the desired person. The main thing that you should do to be noticed is to act actively and creatively. If you slow down or stop, you just will lose what you want.

The Seven of Wands in this position says that your relationship is on the verge of the end. You do not cope with problems, quarrels, and responsibilities. You want to give up as you are afraid that the situation will get worse and more obstacles will appear. However, remember if you are really interested in a partner and appreciate the relationship then you must fight for happiness together. On the other hand, the card may mean that the series of scandals will end soon and you will find a mutually beneficial compromise.

It is also possible that you will have to protect the relationship from third parties who want to become a barrier to your couple. You and your partner must give all the strength to withstand the negative influence from outside.

If the Seven of Wands appears in the Tarot spread of a single, then most likely the relationship does not appear soon due to lack of self-confidence. You are too timid to get close to the person you like or meet someone in general. You let others overshadow you. Try to find strength and energy to tell a person about your love. On the other hand, Tarot may hint that you are too overbearing and aggressive to turn your loved one. If you cannot conquer a person, calm your temper and let him space to want to be with you.

Seven of Wands for money and career

The appearance of the Seven of Wands means fighting for your position at work. Young, ambitious employees always dream of a high position in a fast way, and you must resist them. Remember that you are very talented and have a lot of energy, so you just have to make some effort to stay in position. Another option for the card meaning is that you get an impossible task, goes against your ideals and moral values. Maybe someone is trying to disgrace you in this way; be careful. You have to protect your money and take additional steps to enrich, for example, investment or saving for a rainy day. Try to plan your finances.

The Seven of Wands means a bad moment for a career. You cannot defend your position, and someone takes your place. You do not have the strength to compete on the path to success, and you feel great moral fatigue. You have a lack of enthusiasm and confidence. This possibly mean that you have to go against your moral ideas and social rules. Another version of the script is that some of your colleagues will try to ruin your reputation for their own benefit. Tarot reading talks about financial losses in the event of the Seven of Wands. There are possible unexpected expenses where you have to use savings on a rainy day.

The card is an indicator of competition and obstacles to success. You must be motivated, energetic and ready for anything. Now you decide your own fate and must protect your place in society, money or relationships. Be confident and enthusiastic for a successful outcome.

The Seven of Wands represents courage to pass all obstacles and achieve success. The answer to your question is yes. 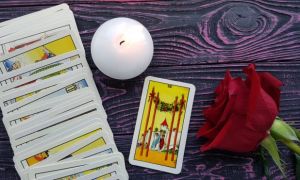