The Seven of Swords shows a young thief trying to escape from a military camp quietly. He goes on tiptoe and holds five heavy swords on his shoulders. Turning around, he sees that he has left two upright swords behind. His smile says that his plane worked and he slipped away undetected. 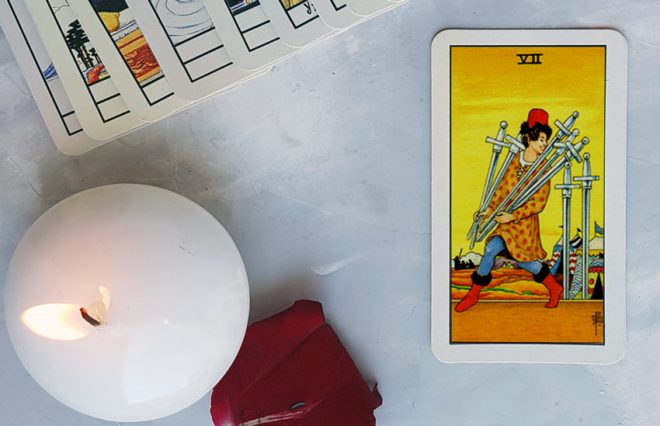 The Seven of Swords means theft, lies, and betrayal. If the thief is you, good luck may be on your side, and you will escape responsibility. However, if you are caught, expect public humiliation from others and severe punishment. Remember this every time you try to take advantage of the situation to achieve your own benefits fraudulently. Even if you managed to go undetected, the need to continually hide could be hard for you. Alternatively, you can be a victim of deception of someone you trust. Pay attention to those who behave suspiciously and avoid contact with you.

A bit of positive. The Seven of Swords recommends you keep in mind that you cannot do a million things at once and achieve success in every business. Do not spray your attention, but immerse yourself in the most effective tasks at the expense of others. The card also says that sometimes it is worth remembering about personal interests first and foremost and pushing the wishes of others into the background. For example, pay attention to the family and forget about the tasks of your boss.

Besides, the Seven of Swords suggests that you are trying to escape from the responsibility of the case, which does not work as it should. You think that it is better to give up trying to fix it than to think with your head and solve the problem. This can be in your work, love or personal life. Something went wrong because of your procrastination and reached the melting point. Realize the guilt and do what you must.

The appearance of the Seven of Swords reversed means that you doubt yourself and your abilities. Fears prevent you from starting new projects and businesses. Trust your ideas and skills to succeed.

Alternatively, the card in the reversed position means that you are trying to deceive yourself with false ideas. You ignore problems and think that everything is okay, but, in fact, you only make things worse. Also, you are prone to imposing beliefs that are contrary to your nature. Look at the issue from a real point of view and think rationally.

The Seven of Swords means inner secrets that you hope will never be revealed. You suffer from the severity of keeping this secret, which brings you stress along with the feeling of guilt. The thought of disclosure scares you, but it can bring calm and relaxation. Contact the person you trust to share your secret. It will also help you to forgive yourself.

Seven of Swords for love and relationships

The appearance of the Seven of Swords is a bad sign for relationships and means betrayal and deception. Basically, the card speaks about the infidelity of one of the partners, however, sometimes it indicates other forms of lies. You may be honest about your feelings to your loved one, but he constantly shirks responsibility. He can manipulate you and ignore your desires.

Alternatively, the Seven of Swords means friends who destroy your relationship worse than enemies. Your couple is not beneficial to someone from your close circle. Perhaps you or your partner have a secret fan who does not show his feelings but secretly affects your relationship. Examine possible suspects and find a person who will benefit from the break-up. Anyway, be on guard as your relationship is in danger.

If you are single, the Seven of Swords recommends being careful as your next partner may be dishonest or manipulative to you. If you want real love and happy relationships, you should appreciate the feelings of other people and avoid playing with you. Surround yourself with kind and honest people. Perhaps you have an overly rational attitude towards love that prevents you from embracing romance. The defense mechanism forces you to be careful and test partners for trust. Do not play with them for too long. As soon as you feel that you are sure in the person, relax and allow yourself to be vulnerable.

The Seven of Swords reversed also means betrayal or lies in a relationship. This does not say that your partner has cheated on you, but he is definitely hiding a secret. In the case of deception, the card means a mystical sequence of events when the truth will be finally revealed. For example, a liar will leave evidence of his guilt. He may have already done it, but you do not notice them or convince yourself that everything is okay.

When the truth becomes clear, the scandal cannot be avoided, but after a temporary break, forgiveness is possible. If this is true love, you will be able to heal wounds, learn a lesson and live on. Alternatively, your relationship ends sadly for you. The cheater will run from you to his new loved one.

The card can also represent the third person who wants to separate you and your partner. This is your friend or even someone from the close circle. Be attentive.

If you are single, the Seven of Swords reversed means a bad relationship with a pathological liar and womanizer. Be careful as this connection will hurt you. Alternatively, the card means that you have been playing with your past partners for a long time, checking them for honesty, but now you can expect an easy-going relationship.

Seven of Swords for money and career

For your career, the Seven of Swords means cheating and tricks in the workplace. Your colleagues are ready to get your position or project at any cost. Most likely you do not even know about the plans against you, because you don’t notice the details. You can find yourself the subject of negative gossips. Someone is playing a dirty game with you, and you have to show yourself as a worthy opponent. Use your sharp wit, resourcefulness, flexibility and daring to win. Be tricky to gain business and career advantage. In case of finances, the card warns of the possibility of theft and fraud. Try to avoid risky investments and money games.

If you did tricks and fraud at work, the Seven of Swords reversed recommends you to tell about it by yourself before it becomes clear. Most likely you are experiencing severe heartache because of the need to lie. Alternatively, the card warns that some of your colleagues are two-faced and are creating something against you. If you have plans and ideas, they risk becoming a failure or not working as you want. Go back to the beginning and come up with something more worthwhile and creative. The Seven of Swords reversed means your finances are in danger. You will become a victim of fraud or theft. Alternatively, if you were engaged in illegal operations, it will become clear.

The Seven of Swords is associated with deception, theft, and disclosure. There is a possibility that you are a victim, so be attentive to colleagues and friends, since they can appear betrayers. Look at the facts rationally and do not miss the small details. Give up tricks and fraud as this can only bring you the constant fear of being revealed.

The Seven of Swords speaks of failures, deception, procrastination, and pessimism. The card has a negative aura, so the answer to your question is no. 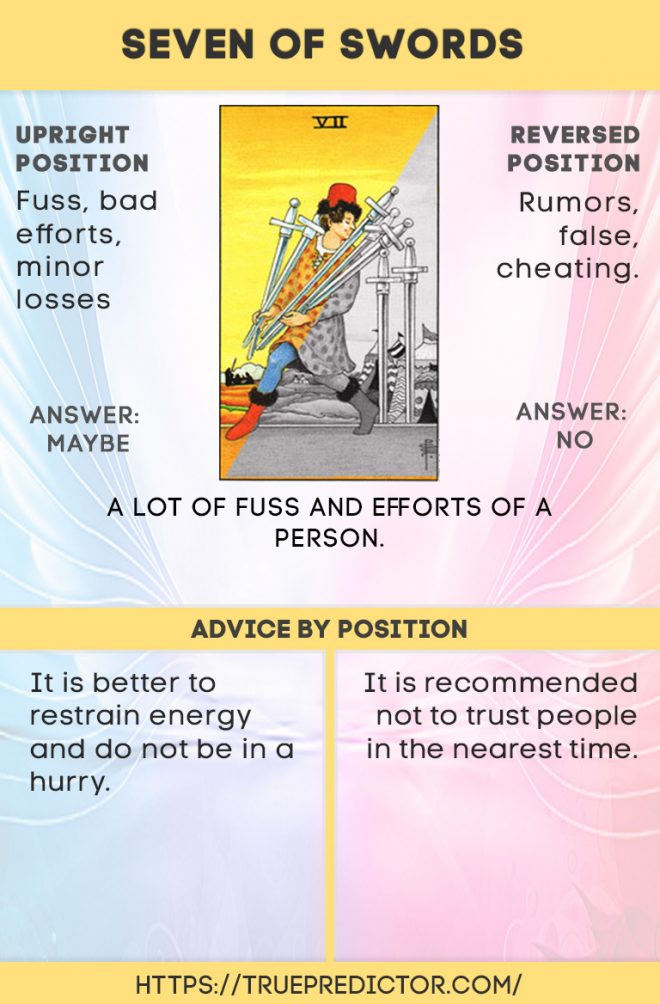