The woman in a red robe is depicted in the Justice card. The crown on her head means the right thoughts. She sits between two columns, which means balance. A piece of white shoes can be seen beneath her dress, which indicates the consequences of actions. The purple veil in the background is about compassion. Her right hand holds a sword, a symbol of erudition, logic, and willingness to defend justice. The sword points upwards showing the firmness of the decisions. The scales in the woman’s left hand indicate a balance between logic and intuition. 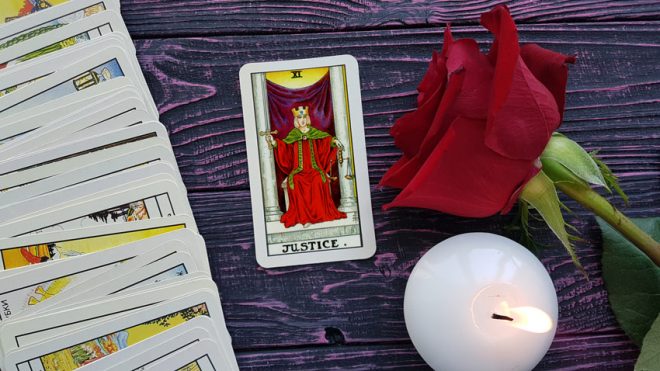 The Justice card appears as a sign that people should be responsible for their actions. If the person acts according to the law and listens to his Higher Self, justice is always on his side. However, if some decisions don’t comply with the general rules, there is a need to worry. As you can see, the card has no only negative or positive meaning. It’s about fairness and truth.

The card often appears during legal cases and means that justice will win. If the person isn’t guilty, the court will confirm this. Otherwise, the person must accept the outcome and move on. Justice has the same meaning for everyday issues and indicates the win of the true.

Justice also appears when it’s necessary to make an important decision, which will lead to long-lasting effects and have an impact on many lives. Intuition will tell the person how to act. He only has to listen to the inner voice and focus on the needs of others. It is important to remember that every decision also brings responsibility for the consequences. The person must ask himself if he is ready for this? In case of uncertainty, the decision must be considered on a more spiritual level.

Alternatively, Justice means finding the truth. It’s a journey with challenges and the need to explore new territories. The person must review his beliefs and open the reality that was previously blurred.

Reversed Justice indicates that the person did something morally wrong. There is a choice: to hide the secret and hope that no one finds out, or to take responsibility and try to correct mistakes. Anyway, the consequences are inevitable. The card can also mean that the person blames other people without realizing the truth. There is a need to review the problem again and determine the mistake. It’s okay to do wrong sometimes, but it’s important to understand it and try to fix it.

The reversed card may also indicate an internal critic who is unhappy with every step done. We all make mistakes, but self-blame does not correct the situation. The person should be kinder to himself and learn self-forgiveness.

In the case of an important decision, the person may lack facts for the accuracy of the verdict. It is better to leave prejudices behind and be as concentrated as possible.

If the person is engaged in a legal matter, there can be some problems that cause an unfair outcome. Some legal complications or inaccuracies slow down the process. The reversed Justice card can mean new disputes.

The card speaks of justice in all spheres of life, including love. Current or future relationships depend on how the person treated people, especially partners, in the past. Kindness is rewarded with kindness, but infidelity and lies turn into failures. The karma is always fair.

For those, who are in a relationship, the Justice card is more positive than negative. However, if the person was inattentive or dishonest to the loved one, there can be quarrels. The only admission of fault correction of mistakes can save the relationship. It is also worth fearing that past betrayals will come to light or will turn into betrayals from the partner. Justice can also mean revenge. If the person wants to receive respect and warmth from a loved one, he must provide it first.

Justice, on the other hand, can mean restoring harmony within the couple. Disagreements and disputes between partners will be resolved. Lovers will find a compromise and reach a balance. In the case of discussions about marriage and children, partners will also come to a common ground. The card doesn’t specify which decision the couple will take.

For singles, the Justice card is a sign that they will soon have a new relationship. The behavior of a person in relation to people in the past will return as a potential partner’s characteristic. A good man or woman will get a decent partner. Those, who were unfaithful or abusive to the ex, risk to experience the same thing in a new relationship.

First, reversed Justice means that one of the partners hides secrets from another. The card may indicate insincerity of feelings. The person may have previously had a strong attraction, but it’s gone, and he doesn’t dare to say this to his partner. Justice recommends talking about it gently so as not to offend anyone.

The card in a reversed position may be a sign of infidelity. Because of weakened feelings, the person seeks satisfaction outside the relationship. It will come to light soon and may cause separation or divorce.

The reversed card also indicates any lie told to save the relationship. It never leads to a good result. Justice talks about honesty between partners regarding every topic. Each issue or problem should be discussed inside the couple. Lovers should not have secrets from each other to achieve success. If there are problems at work or other areas of life, the person should inform the partner about it. Otherwise, it negatively affects the quality of the relationship and causes distrust.

Problems inside the couple may also be due to the trauma during the previous relationship. Incorrect behavior of a former partner could cause self-doubt or distrust of people. An open conversation with a loved one will help solve the issue.

For singles, reversed Justice also means the consequences of a failed relationship in the past. The person has not yet bounced back and is not ready for a new love. However, when this moment comes, the main thing is not to repeat mistakes. Also, there is no need to fear a new relationship as the right partner can improve a person’s self-believe.

The appearance of the card means a lack of balance. The person spends more time at work than with loved ones. Career is not the most important thing, and it is necessary to develop in all areas of life. For finance, Justice means returning debts. Also, if a friend asks for help and the person can afford to lend money, it is better to do it. Karma will appreciate such an act. Besides, there is a need to pay attention to charities and provide material aim. The card also recommends thinking about writing a will.

Justice in a reversed position means unfairness in the workplace. The person is underpaid. In this case, there is a need to ask the boss for better treatment calmly. If it doesn’t work, it’s better to think about a new job. The appearance of the card may mean illegal financial transactions or theft of money. Guilt eats the person up inside and affects relationships with people. The best way is to admit guilt and accept all the consequences.

The card is about truth and justice. The person must take responsibility for his actions to find peace. Alternatively, if an individual finds out the truth, he should accept it calmly and not keep anger. In general, Justice talks about the power of karma and the need to do the right thing to receive benefits from the universe.

The Justice card symbolizes truth, justice, and balance. It doesn’t speak about the good or bad outcome. There is no exact answer to your question. 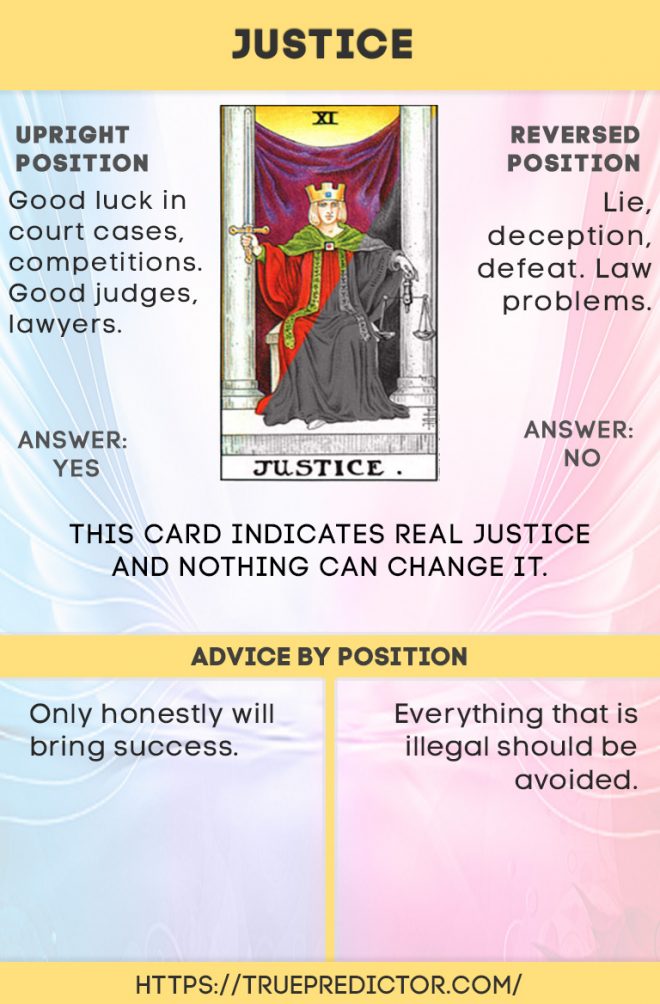