The Hierophant Tarot card has a man in a church robe sitting on a throne. He holds his fingers of right hand up showing a sign of peace and the other hand holds a goldenrod. The two crossed keys symbolize fidelity to the Pope and refer to the Hierophant in the medieval times. This position is a historical form of the modern Pope, who led the army, acolytes and ruled the Vatican lands, which are now known as the State of the Church or the Papal States. Thus, it is often associated with religious meanings including heavens signs, but other interpretations and doctrines are possible. It refers to pentacles, the earth element and the zodiac sign Taurus. 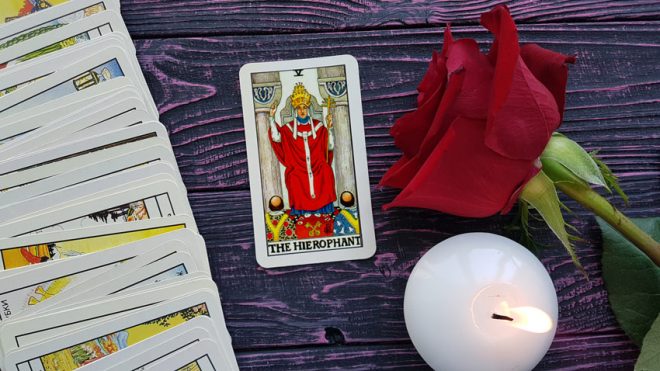 It has been historically shown that the Hierophant card represents spiritual strength and beliefs of human beings. The chosen Major Arcana card means that you have an influential person, teacher, mentor in your life or are such a character for someone else. This man is also a spiritual pillar for you which will help open your eyes wider. It is an authority that changes your opinion as a student and counsels you to the right understanding of world principles and even brings you closer to your dreams. It may have a positive and negative interpretation, which indicates further consequences and your attitude.

If you see the Hierophant, the meaning and significance also depend on its position in the Tarot spread. The past position means already organized beliefs and principles based on the characteristics of the culture where you grew up. The tarot card location in the present position speaks of the creation of new beliefs, possibly related to the specific realm or doctrine like politics, religion. The future position is the most powerful, which indicates a strong push in your life and its understanding.

The upright position of the pentacles card speaks of the obviousness or appearance of the process of adopting already established beliefs. This can mean your participation in certain rituals and ceremonies, the adoption of traditions of a religion or other realm. Tarot reading, in this case, can portend a wedding or your entry into a new institution. Anyway, the Hierophant denotes your intentions to give yourself up to such principles and structures that also include the conservative approach and avoid the process of innovation.

The Hierophant reversed can denote that all changes come from inside and everything is under your control. You are both a teacher and a student. This is a good sign since you do not depend on outside influence and feel awareness about when is the time for action by yourself personally. The difficulty may be that you must learn to handle the clues of the inner voice and be prepared for the responsibility of decisions. However, the card indicates your readiness to overcome obstacles and gain success.

In this case, the card can represent a positive sign, which can lead to the wedding. The card is symbolizing unification, so its appearance hints about a close relationship with your current chosen partner. If your couple has been together for a long time, the high priestess in love Tarot can mean that you and your partner pillar and share the same principles, so you are ready to move on to a more serious stage of a relationship, marriage.

If your love life was a failure because of the wrong behavior of chosen partners, The Hierophant can also teach you that there are as many good partners in the world with similar intentions to yours as there are bad ones. Do not be discouraged by the lack of the right man or woman in your life. Remember that you decide to take them into your life or reject by yourself.

This is another matter if you have frequently been changing partners for fun for a long time and now you have intentions to find the beloved person, but still afraid of the required commitment and, moreover, of the status of husband or wife. The Hierophant advises choosing one direction and sticking to it.

In the reversed position the Hierophant denotes problems in your relationship related to the unconventional approach, for example, one of the partners is against marriage. It can also indicate an imbalance in the division of gender roles in a couple. Conflicts may be due to this even if your eye doesn’t notice it. The solution is open dialogue and compromise.

It denotes for married couples that you should start sharing the views of your husband or wife. Also, think about your relationship and marriage in general, it is best to visit one of the churches because heavens can help you now.

If you are single and the card appears, then you have lost faith in the possibility of true love in your life. Tarot thinks you are pushing away happy relationships from yourself with your negative thoughts. It complicates the process of your dream visualization and distances you from a potential husband or wife. As for single, this card means the emergence of love in the life.

The meaning for career and business is useful advice to improve the result of your current intentions.  Such a position suggests a course to the teamwork and established methods. A group project can give you a valuable mentor. Tarot’s all-seeing eye advises you as a student to spend your future time gaining new skills and knowledge in educating structures. Do not take significant risks and invest in proven areas and projects.

This form of Hierophant symbolizes working with an unpleasant higher in rank person and your awareness or even fear of working with him. You and your colleagues are going to be forced to act according to his rules. Teamwork brings discomfort due to differences of opinion and pressure on you. Meeting with a mentor, in this situation, can make significant changes. It can be a person or group of people who have already experienced difficulties in your field. Alternatively, the counsel can be from the past: old school trends or forgotten trading techniques, maybe, doctrines.

The main advice of the Major Arcana, in this case, is the observance of established principles that will help you make the right choice. Give yourself to the traditions and rituals that you used to love or discover the new ones, maybe, with the emergence of a group of human beings organized and united by similar intentions. Exclude the unconventional approach and doctrines. Do not resist people who want to counsel you and open a new outlook on life that your eye has not seen before. Perhaps, a positive result in all your intentions waits after your visits to the churches where you can also find a pillar.

The Hierophant cannot give an exact answer yes or no to the chosen issue because it does not have an exclusively positive or negative interpretation. It insists on the observance of established world structures, teaching by the method of spiritual following the mentor and dream visualization. The card means maybe. 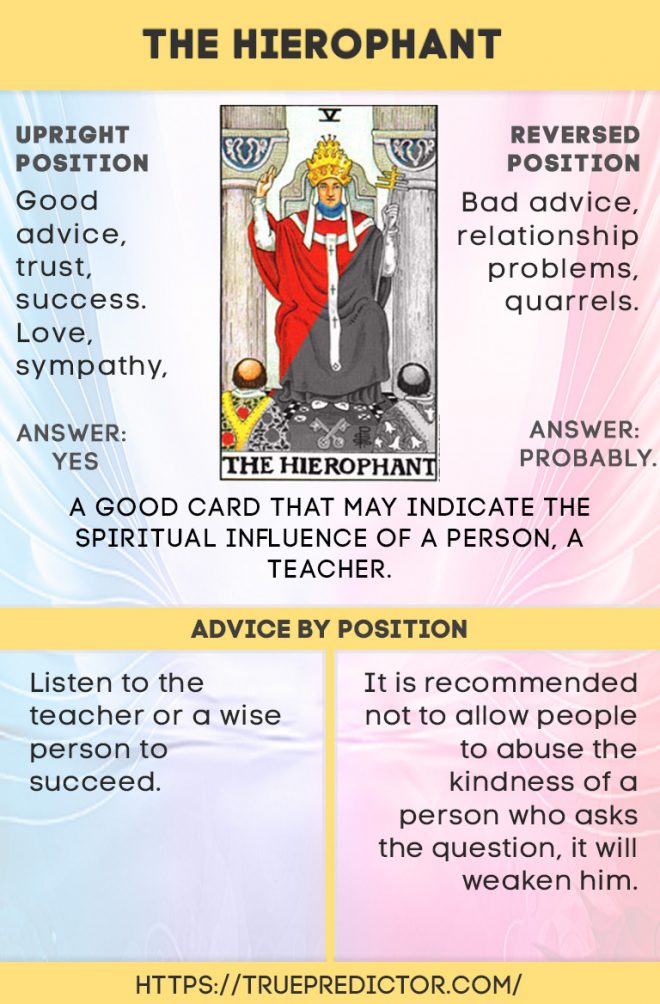