The Five of Swords shows the battle that took place on the shore and was lost. We can see a tired and sad man picking up swords; he already has 2 of them on his shoulder, and 3 more are on the ground. He turns around and sees his two friends, who are also exhausted by the fight and walking away. The weather is also not on their side. The hair and clothing of the man with swords are blown by a strong wind, and the sky is cloudy. This is a symbol of the fact that quiet times have not yet come despite the end of the battle. 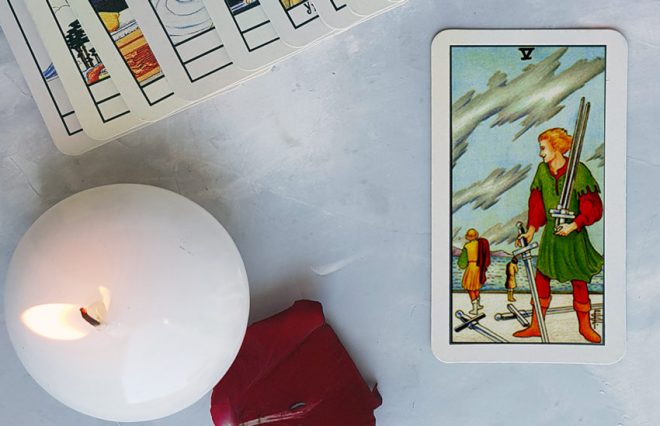 Usually, the Five of Swords speaks of failure despite your efforts. You can find yourself tired and weak. It appears to those who had disagreements or conflicts and were defeated. Accept your defeat wisely and live on. Maybe, you regret the harsh words you said and actions you did, but you cannot fix it. The best way is to apologize. Do not try to justify your behavior. Try to find common ground with those who you fought with. The card may also mean that the cause of the conflict is the desire to achieve success. You perceive opponents as a barrier to your happiness.

The Five of Swords advises not to fight if you can leave without losing the next time. Not all conflicts are worth your attention. Choose battles wisely to live more peacefully and maintain good relationships with people. It is better to agree with the opponent or get away from the discussion initially not to lose self-control.

In case you quit the battle with a victory, the Five of Swords says that you have lost more than your opponent. This battle has taken a lot from you, starting with the resources and ending with the respect of others. You may even feel that you are losing people around you, and those who remained are uncertain about you. Ask yourself, if your point of view is more important than the relationships with your friends and colleagues.

The Five of Swords reversed means battles with no winners. You and your opponent are fighting to find out in the end that you have lost more than you got; you both feel like an idiot. Most likely, you understand that your efforts are in vain. You want to end the conflict, forgive each other and move on to a new stage.

The card in a reversed position also speaks of a conflict that you cannot avoid. It continues to follow you and cause problems. For example, this could be a person who blocks your path to happiness, love or success. You should make every effort to avoid meeting with this person and prevent his attempts. The Five of Swords reversed also means a situation where old fears can harm you again. Something that has been bothering you is back, and you feel pressured. The best solution is to forget the old problems and think about the future.

The presence of the Five of Swords in your Tarot reading indicates a conflict that is not complete. You had a heated conversation with your friend or relative that still causes negative emotions. The longer you keep the offense, the harder it is to find harmony and forgive.

If a conflict is resolved, you should apologize to your opponent to avoid negative energy in the future. Now you are free and can move forward. Turn on that positive and creative person within you to rich harmony in your life.

Five of Swords meaning for love

Having the Five of Swords in your love tarot means conflict in a relationship due to a lack of communication. The card also says that the hidden will be revealed. If you are not honest with a partner or you cheated on him, he will find out about it. In this case, expect a break up as your loved one will not be able to handle this. This can result in a divorce for married couples.

In the worst case, the Five of Swords means bullying, abuse or even domestic violence and rape. Remember that love doesn’t bring pain, and such a behavior is not normal. Lovers love each other and cannot want to humiliate another partner. If you experience fear in a relationship, this is wrong. Ask your friends, family, or even special organizations for help. You must gain strength and confidence to get away from this person.

If you are single, the Five of Swords indicates a potential relationship with a wrong person who could be dangerous for you. To avoid bad contact with disastrous consequences, you must be careful. Before you go on a date with a new person, find out the maximum possible information about him; ask your friends and family members. Besides, choose a public place and inform your relatives about the meeting.

The Five of Swords reversed can be said a good sign in a relationship. Your couple is at a reconciliation stage after a big conflict. You both made incredible efforts to bring peace back, but this is only the beginning because maintaining this state is even harder. Communication and compromises are the keys to a successful relationship. If you return to previous patterns, you will risk repeating the same mistakes.

The card also has the opposite meaning. The Five of Swords reversed can represent misunderstanding due to lack of communication. It also symbolizes public shaming for the fact that earlier you were not faithful to your partner. You can face revenge and a feeling of regret. If you feel offended and experience constant bullying in a relationship, beware of the fatal continuation. You are in danger and can become a victim of domestic violence.

If you are single and have the Five of Swords reversed in your Tarot reading, most likely you were too critical of potential partners. Let the person reveal himself before making a choice. Alternatively, you have just realized that the person you are interested in is not as good as you thought so you decided to stop trying to build a relationship.

Five of Swords for money and career

The appearance of the Five of Swords indicates conflicts in the workplace and the lack of communication with colleagues. You feel depressed and think about changing jobs. The card can also talk about bullying or harassment from higher-ranked people. You must keep firmly, but calmly, do not let emotions take control emotions and make rational decisions. The Five of Swords means illegal cash transactions or financial intrigues behind you. Watch out for what you are investing. Your contracts and partnerships can lead to defeat. The best option for you is to start saving now; forget about expensive things and provide yourself with the most necessary things, nothing extra.

The Five of Swords reversed talks about the end of a conflict or discussion with colleagues at work. You must make an effort and communicate more to get rid of the problem completely. Alternatively, the card indicates that the battle moves to a new level that is not favorable for you. Someone has information that can be used against you, so be careful. If your business or actions at work are not entirely legal, you risk being disclosed and publicly shamed. In a financial sense, the Five of Swords reversed also says that non-transparent contracts can turn into problems for the person responsible for them. In addition, the card symbolizes exemption from financial problems and debts. You will find a way out of money problems.

The presence of a card indicates that you are part of a conflict that prevents you from calm living. You must realize that it is not always important to win any battle; the main thing is harmony and trusting relationships with people. If the discussion is over, but you feel guilty, apologize to the opponent and make efforts to bring peace back. The best conflict prevention is regular communication.

The card is negative, so the answer to your question is no.

The Five of Swords card has a negative meaning and talks about money conflicts. Love Tarot promises problems and revealing lies in the future. 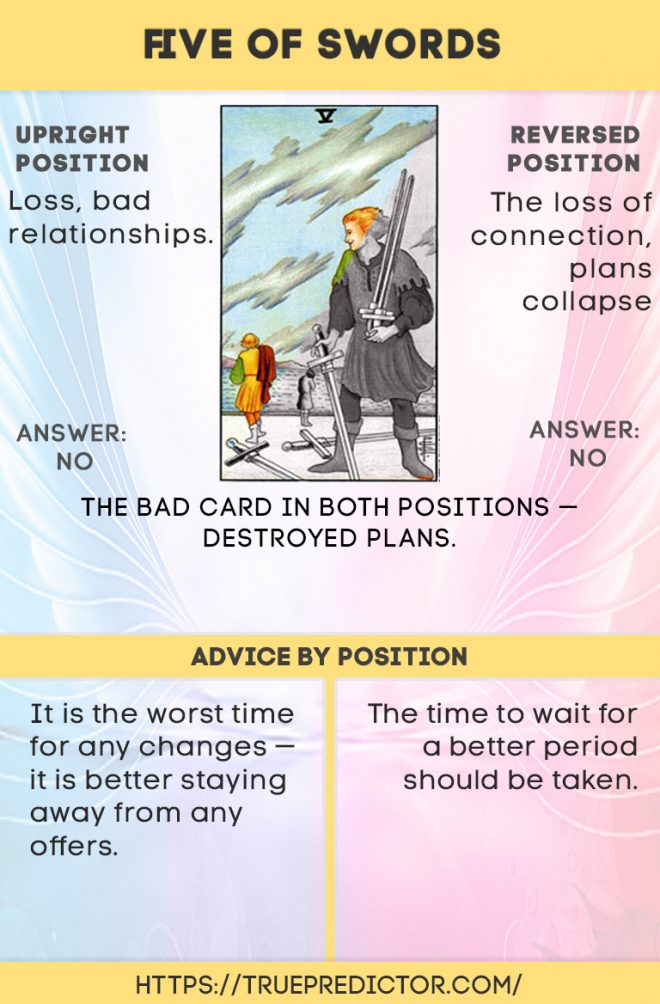