The Emperor is associated with the father. He sits on a throne adorned with four rams ’heads referring to Aries and the planet Mars. The red robe symbolizes power and passion. Underneath it, there is the armor that protects the man from physical and mental hazards. White long beard suggests experience and wisdom. The crown on the head is an absolute sign of authority. His right-hand holds an ankh, the Egyptian symbol of life, while an orb lies in his left hand representing the world under the Emperor control. 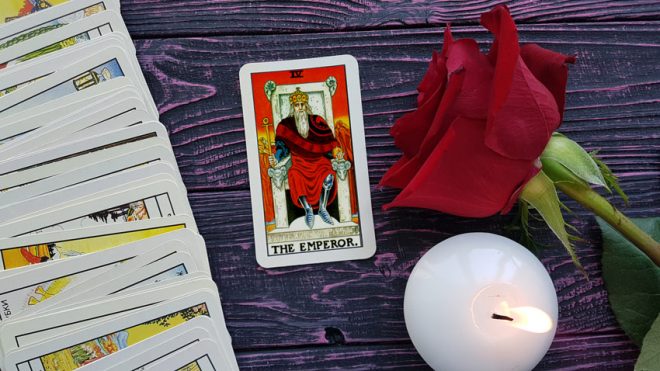 The mountains in the background are a sign of a solid foundation, which the Emperor sees no reason to change. The river below means emotionality, which is very poorly visible to the outside world.

The Emperor meaning in universal readings

For men and women, the Emperor means the role of father and the need to protect loved ones. Similarly, it’s a card of a leader and authority. The person feels comfortable when everything is under his control. It’s a wise leader who sees what he wants and knows how to plan actions to achieve the goal properly. The one takes into account the opinions and wishes of others while making his decisions. He uses power to protect loved ones and suppress conflicts. It causes respect among people around in response.

The Emperor creates and appreciates the rules. Discipline is an excellent way to overcome chaos inside the person. Peace of mind and soul is the basis of success. It also helps create a strategy and the right approach to any matter.

The appearance of the Emperor card is also a sign of a wise guide and advisor. The experience of past years allows correctly assessing the situation and draw significant conclusions. This can be a teacher, boss or friend. The person provides assistance to someone who will benefit from this.

The reversed Emperor means issues related to power and control. On the one hand, this indicates over-use of authority. Basically, the reason for this comes from childhood. On the other hand, the card indicates a lack of control over life and people around. Alternatively, the person misuses his power to achieve unnecessary goals, to please someone else.

The card in this position often says that people hope for the person as a leader and professional of his field. However, fears stop him and keep him in the shadows. It is worth remembering that it is not necessary to stand in the first row and say inspirational speeches to help. If the person doesn’t want to be a leader, he must train the one who can do it.

The appearance of the reversed Emperor is often a reminder of the importance of discipline and detailed planning. The person must see the goal, the road to achieving it, and go without turning to the end. Even the most challenging obstacles must be passed without a doubt. Only in this case, efforts will lead to success.

What does Emperor  mean for love and relationships?

The Emperor is a good sign for those who are starting a new relationship. Partner, regardless of whether it’s male or female, very responsible and reliable. Things go easy, and lovers feel each other’s support. This is a great card for those who want to settle down and marry.

For those couples that have long been together, the Emperor also has a positive prediction. Lovers work on the relationship and well-being together. Both partners make an equal contribution and resolve all issues together. Perhaps they have a common business or workplace.

The Emperor as a person is a solid partner who takes care of everything. The card is associated with male energy and the characteristics of the true leader. He or she appreciates discipline and loyalty. Such a lover is ready to take on heavy duties requiring the fulfillment of his desires in return. Many may consider this a dominance, and this is true. If the person can’t be under constant control, the Emperor is his nightmare. The relationship can end quickly because of this.

For singles, the card foreshadows a meeting with the person described above. It will be an excellent partner for those who want to settle down. He or she will create an excellent foundation for living together and creating a family. On the other hand, it may be a short affair with a dictator.

The appearance of reversed Emperor in love readings means that someone in a pair, most likely the male, goes too far with control. This leads to an imbalance of power, where one partner dominates and the second feels trapped. The card, in this case, indicates a feeling of oppression and humiliation. The person just wants warmth and care while receiving only instructions and complaints. Control doesn’t always mean stability especially when there is no freedom.

Both partners must work to save the relationship. The one who wants to dominate must learn to hear the needs of the loved one. The couple should direct the energy towards the development of both. However, it is worth noting that the Emperor reversed often indicates breakup.

The reversed Emperor as a person is a very cruel creature who uses power to manipulate. Being in a relationship, he gracefully uses the feelings of a partner to achieve goals. There is a need to guard against such a person and end the relationship.

For singles, the Emperor in a reversed position is meaning that strong relationships will come but not soon. Before finding happiness with one partner, the person will have a series of short-term romances. There is a need to beware of the people described above. A decent man or woman will appear unexpectedly, but the person will understand this.

The Emperor for career

The Emperor is a sign of reward for good work. It could be career promotion, pay raise, or a successful deal. The card is associated with self-employment, which is why it often heralds the opening of a new business. The financial future promises to be stable. The person may not be afraid to make risky decisions about money, but he must act smartly. However, don’t forget about saving. There is a need to think about spending habits. Don’t make extra purchases if they are not necessary.

In a career context, the Emperor reversed means job dissatisfaction. The person has been working in one position for a long time and lost interest. This may also be due to an incompetent or dominant boss. The person does not feel respect and gratitude for his work. Now is the moment for change. This may be a new workplace or field. There is a possibility that the individual chose the wrong direction and failed. Unfortunately, the reversed Emperor is a bad sign for finance. The person doesn’t have enough money because of excessive spending or due to a small salary. A friend or a financial professional can give advice on how to solve this problem.

The card gives a person the qualities of a leader. His only task is to use these skills properly. The person must observe discipline and self-control to gain respect from others. The Emperor always has a plan and is ready to act. Regardless of age, the person must use the experience to make important decisions. The card often means a wise teacher or guide who should give advice to a young guy. The person should not be greedy as knowledge should be shared.

Yes or No Tarot Reading

The Emperor is a father, a wise teacher. He is a leader and protector of weak people. The card is associated with power, authority, and control. The answer to your question is yes. 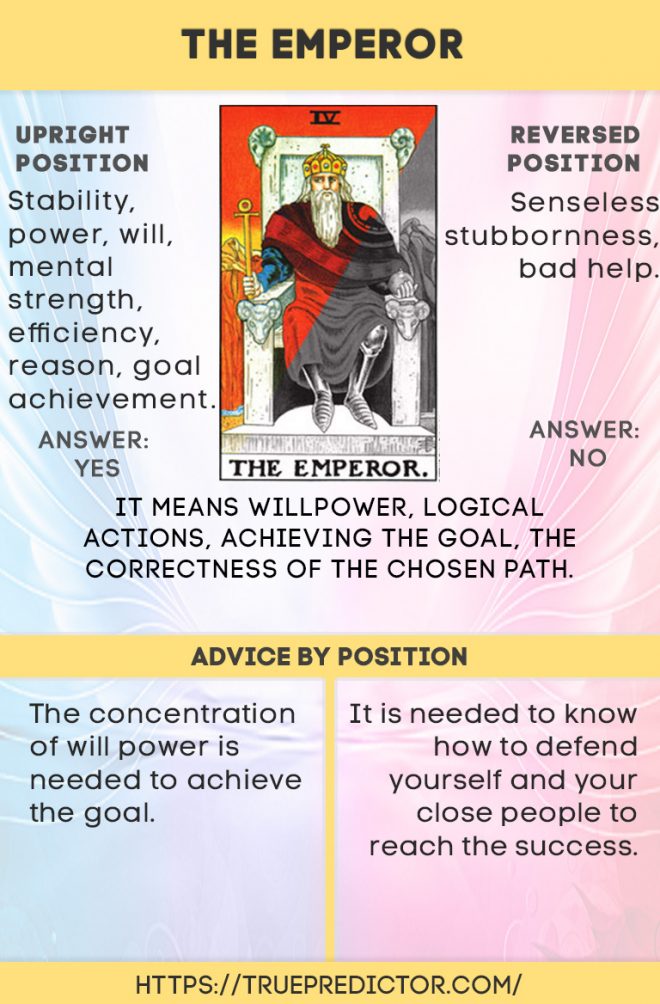