The card shows the Eight of Cups standing on the foreground. They are put in this arrangement for a reason. It can be noticed that it seems that one cup is missing. This represents a lack of emotional integrity. The man in the background moves away from the cups using his stick to climb the mountain. He is associated with frustration and sadness. The river is his emotions. The mountains are obstacles that complicate his path. However, the man must pass them as his happiness is behind them. Only the moon illuminates his path — he goes at night to slip unnoticed. 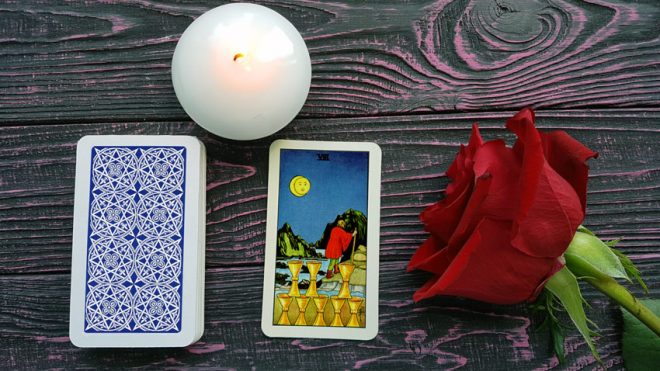 The Eight of Cups appears when there is a need to get away from the frustrating situation. It used to be a source of positive emotions, but now it only brings the pain. Perhaps it’s a job or a relationship that was very important, but circumstances turned everything upside down. Leave disappointments behind even if it causes sadness. Maybe you do not understand what the Eight of Cups is about as it seems that everything is well. However, the feeling that something is missing lives inside. Other people don’t notice this because they do not see the whole situation. Despite the constant thoughts, give up what is missing.

Alternatively, The Eight of Cups means avoiding situations that bring emotional pain or discomfort. However, it should be remembered that the problem does not disappear if ignored. Accept the fact that you just pretend that everything is fine and refuse to deal with the source of disappointment. Friends or relatives could help, but they don’t even know about the problem as you don’t tell them.

Think about what makes you happy. The Eight of Cups sometimes means that the things we are aiming for are not exactly what we need. The card is about focusing on deeper feelings and desires. For example, the one thinks that a long-term relationship is necessary, but actually, he needs a special connection between him and a partner. Someone might think that these are the same things, but these are different experiences. Leave something that only looks good, but does not bring inner satisfaction and go in search of real happiness.

The reversed Eight of Cups speaks of choosing to “leave or stay?” However, this is not the question that needs to be answered. If there is such a situation, think about whether the situation will change or better to run away until things get even worse. Do not retreat so quickly and give the case another chance. Use your intuition to make the right choice.

Sometimes the Eight of Cups in the reversed position means that you regret what has been done and dream of a second chance. This is true if other passive cards such as the Four of Swords or the Hanged Man are nearby. However, a more active card like the Eight of Wands or Chariot talks about the need to forget and move on.

When thinking about further actions use your heart and do not listen to others. Friends and relatives can give advice, but only you know the whole situation and what is needed. Select options that match your dreams and goals.

Alternatively, the Eight of Cups reversed indicates constant uncertainty. “The grass is always greener on the other side” so you are never satisfied with what you have. Evaluate the pros and cons to decide the direction of your life flow finally.

Eight of Cups meaning for love

At first glance, it seems that the Eight of Cups is a bad sign since the card means breaking the relationship. However, this is not entirely true, since this departure means getting rid of problems. You or the partner feels that love has gone and there is no point in staying with each other now. Therefore, one decides to stop this and leave behind. Toxic relationships only weight life down.

The Eight of Cups also talks about the difficulties of leaving. It is hard to give up what is connected with warm memories. However, the card also empowers the owner with the courage and strength to make this step. Sometimes the second partner doesn’t agree with the decision and doesn’t let the loved one go. This leads only to quarrels, which worsens the situation.

If you are single, the Eight of Cups does not foreshadow a new relationship soon. However, it’s not bad. Temporary loneliness helps to recover from a painful breakup and gather strength for a new romance. Alternatively, the card means uncertainty about true love due to negative examples in life, for example, the experience of unsuccessful relationships and parental divorce. Supporting cards help determine the exact meaning of the Eight of Cups.

In a love Tarot, the Eight of Cups reversed means a bad relationship. One or both partners are stuck in it and cannot get out because of the fear of being alone. At the same time, both have an active social life and success at work. This is a common situation when a person pretends that everything is good for the outside world, but inside the couple, things have become monotonous and annoying. The problem is that the partner does not dare to break up. Look at things from the right side and think about which outcome is better.

Alternatively, the Eight of Cups in a reversed position indicates a lack of responsibility or maturity. Due to lack of experience, you or the partner are afraid or don’t know how to move relationships up. As a result, both are unhappy. The card also speaks of negative experience associated with difficult separation or divorce. You may only saw similar situations or had them in life.

If you are single, the Eight of Cups means desperation, which is revealed in clingy behavior with potential partners. You either scare them away or let mistreat you. Unfortunately, low self-esteem doesn’t allow finding happiness. Alternatively, the card means fear of responsibility. A relationship does not last long because of this. The causes of the problem may be different from a lack of maturity to negative experiences in personal life. Anyway, work on it to get a healthy relationship. After increasing self-esteem and getting rid of the shortcomings, you will find your happiness.

Eight of Cups for meaning money and career

Speaking of career, the Eight of Cups indicates leaving a position that no longer attracts you. Complete career change is also possible. For a business, the card means the termination of a project that is no longer interesting. Alternatively, an innovative idea will inspire you and bring back love for work. Business trips or new markets may be ahead too. The Eight of Cups recommends controlling the finances and carefully planning the spending. Listen to the advice of the right people. If they are not competent enough or do not share your goals, find other advisers. Sometimes, a card means losing money. Supporting cards indicate the correct answer.

For a career, the Eight of Cups reversed indicates that work has become dull and less attractive. However, you are afraid of leaving because of the fear of being unemployed. Understand that the world is full of diverse opportunities and works for everyone. Take courage and realize that change is for the better. In the case of a business, the card indicates a lack of profit or interest. Get rid of the fear of losing everything and at least try something new.

8 of Cups gives the only advice is to get away from what is not satisfying anymore. Leave a job, relationship, hobby or idea behind if it no longer attracts. Change is difficult, but the card gives you the strength to cope with it.

The Eight of Cups are associated with the difficulties of change. The card recommends giving up or leaving what is bothering, despite pleasant memories. The answer to your question is no. 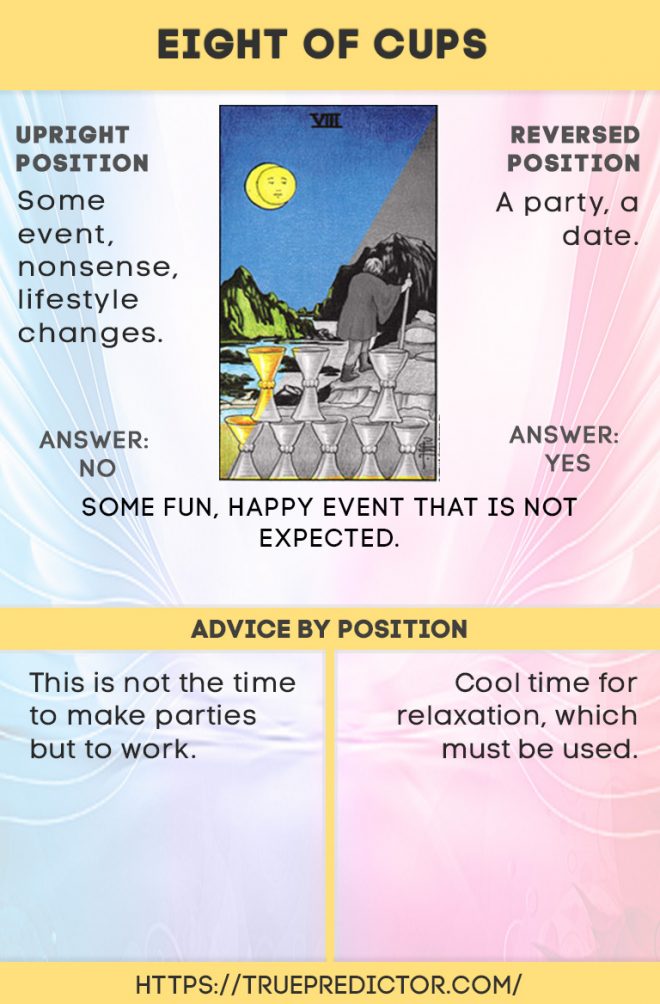